Founded in 1988, Les éditions du Septentrion is above all a publishing house specialising in history, although it is also interested in the human sciences in general. It also publishes titles in archaeology, political science, ethnography, etc. It has also published some literature, particularly historical novels.

Éditions du Septentrion wanted to create a virtual tour about the history of Saint-Charles Church in the Limoilou quarter of Quebec City. Timer evolution of the neighbourhood is presented in a way that offers a complete immersive experience.

The virtual environment was developed in the Unity game development engine for Oculus Quest headset.
In order to realise the different epochs of the quarter for the reconstruction of history, the environment was developed in the manner of a pop-up book with a 3D universe composed of 2D elements. For this purpose, CIMMI developed a tool that enables the illustrator drawings to be transformed into a 3D model with a thickness and a cut-out according to the shape of the drawing.
The central scene of the application represents the forecourt of the St Charles church in Limoilou.

From the beginning of the project, a great synergy was created between the publisher (Éditions Septentrion), the cartoonist (Parenthèses 9) and the CIMMI. The experience was appreciated by the community. The graphic and technological choices made it possible to obtain a magnificent visual environment that requires few graphic resources. The Popup Limoilou experience is now available in Quebec City libraries. 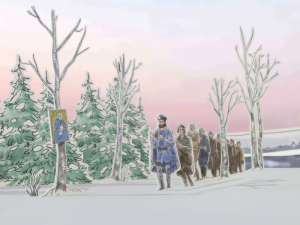 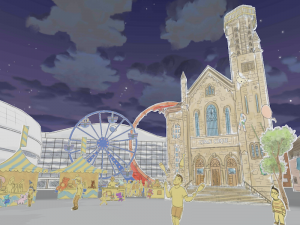